Ethernet is a baseband LAN technology. Ethernet communication is a communication method that uses coaxial cable as a network media and uses carrier multi-access and collision detection mechanisms. The data transmission rate reaches 1 Gbit/s, which can satisfy the need for data transfer of non-persistent networks. As an interconnected interface, the Ethernet interface is very widely used. There are many types of Gigabit Ethernet MII interfaces, GMII and RGMII are commonly used.

RX_ER(Receive Error): Receive data error prompt signal, synchronized to RX_CLK, active high, indicating that the data transmitted during the valid period of RX_ER is invalid. For 10 Mbps speed, RX_ER does not work;

TX_EN(Transmit Enable): Send enable signal, only the data transmitted during the valid period of TX_EN is valid；

GMII interface is shown in Figure 15. 2. 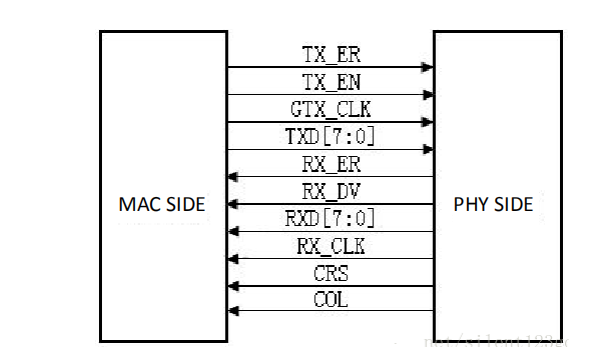 RGMII, or reduced GMII, is a simplified version of GMII, which reduces the number of interface signal lines from 24 to 14 (COL/CRS port status indication signals, not shown here), the clock frequency is still 125 MHz, and the TX/RX data width is changed from 8 to 4 bits. To keep the transmission rate of 1000 Mbps unchanged, the RGMII interface samples data on both the rising and falling edges of the clock. TXD[3:0]/RXD[3:0] in the GMII interface is transmitted on the rising edge of the reference clock, and TXD[7:4]/RXD[7:4] in the GMII interface is transmitted on the falling edge of the reference clock. RGMI is also compatible with both 100 Mbps and 10 Mbps rates, with reference clock rates of 25 MHz and 2.5 MHz, respectively. 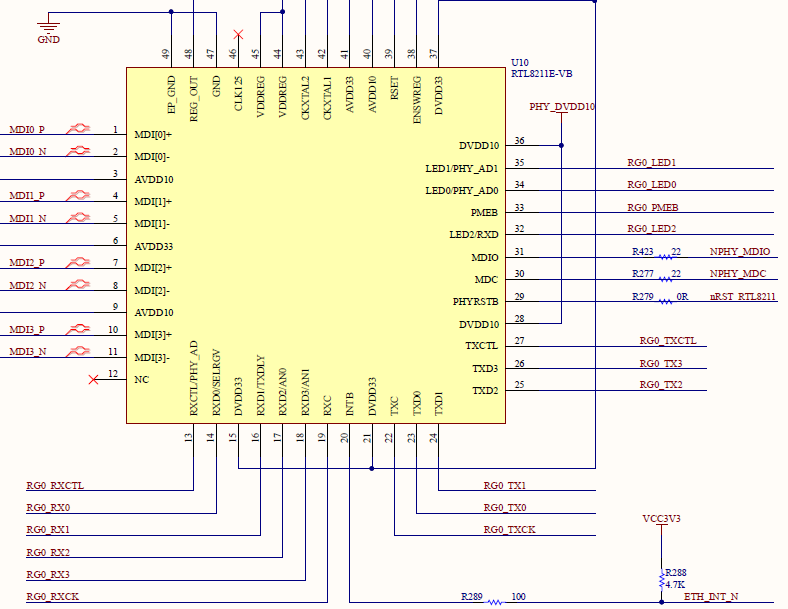 The RTL8211E-VB chip is used to form a Gigabit Ethernet module on the experiment board. The schematics is shown in Figure 15.4. The PHY chip is connected to the FPGA by receiving and transmitting two sets of signals. The receiving group signal prefix is RG0_RX, and the transmitting group signal prefix is RG0TX, which is composed of a control signal CTL, a clock signal CK and four data signals 3-0. RG0_LED0 and RG0_LED1 are respectively connected to the network port yellow signal light and green signal light. At the same time, the FPGA can configure the PHY chip through the clock line NPHY_MDC and the data line NPHY_MDIO.

Before verification (the default PC NIC is a Gigabit NIC, otherwise it needed to be replaced). PC IP address needs to be confirmed first. In the DOS command window, type ipconfig -all command to check it. Example is shown in Figure 15. 5. 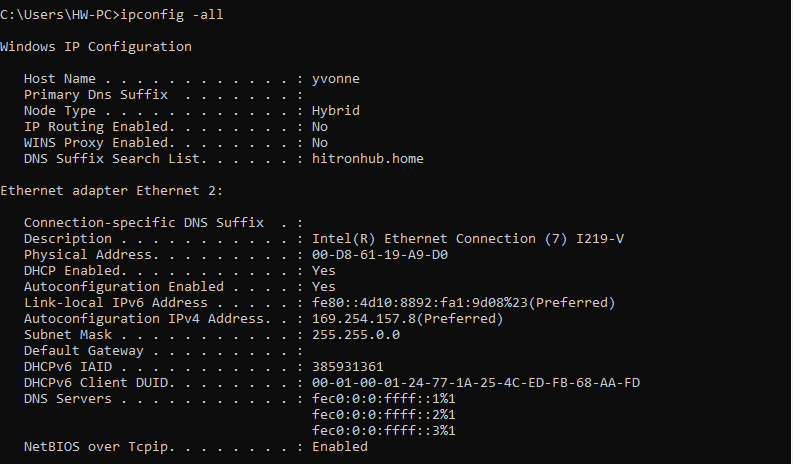 To facilitate subsequent experiments, PC is provided a fixed IP address. Take this experiment as an example, IP configuration is 192.169.0.100(could be revised, but needs to be consistent to the IP address of target sending module, for Internet Protocol reason, IP address 169.XXX.X.X is not suggested). Find Internet Protocol Version 4(TCP/IPv4) in Network and Sharing center. See Figure 15. 6. 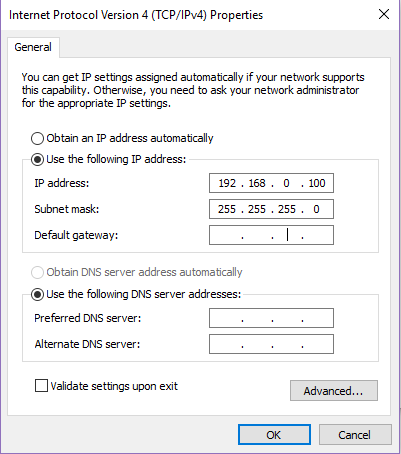 Since there is no ARP protocol content (binding IP address and MAC address of the develop board) in this experiment, it needs to be bound manually through the DOS command window. Here, the IP is set to 192.168.0.2 and the MAC address is set to 00-0A-35-01-FE-C0, (can be replaced by yourself) as shown in Figure 15. 7, the method is as follows: (Note: Run the DOS command window as an administrator) 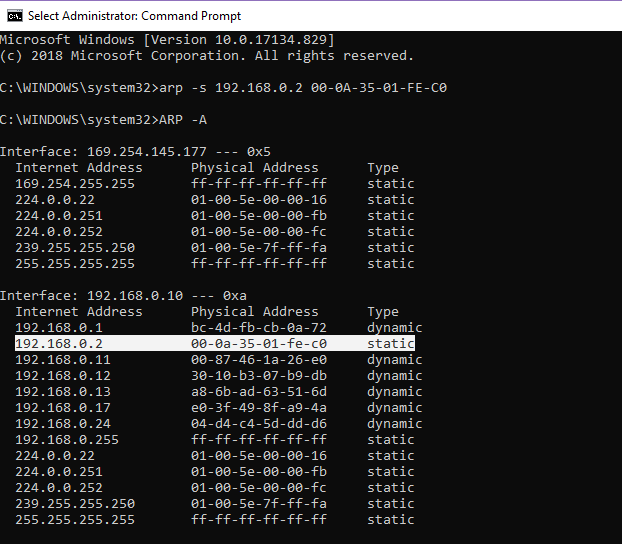 If a failure occurs while running the ARP command, another way is available, as shown in Figure 15.8:

Next, we also use the DOS command window for connectivity detection, as shown in Figure 15. 9. Ping is an executable command that comes with the Windows family. Use it to check if the network can be connected. It can help us analyze and determine network faults. Application format: Ping IP address (not host computer IP).

The first step: introduction to the program

The loopback test only needs to output the input data directly. Refer project file loopback for more information. In the project, two IP cores, IDDR and ODDR, are used to complete the receiving and transmitting functions.

Because it is the RGMII interface, the data is bilateral along 4-bit data. Therefore, when data processing is performed inside the FPGA, it needs to be converted into 8-bit data. Go to PROJECT MANAGER > IP Catalog > SelectIO Interface Wizard to call the IP core(e_input_inst). SelectIO Interface Wizard is essentially composed of IDDR and ODDR. After internal data processing, IP core is passed (e_output_inst) to convert 8-bit data into bilateral edge 4-bit data transfer. It should be noted that, considering the enable signal and data signal synchronization, the enable signal is entered for conversion at the same time. The specific settings are shown in Figure 15. 11 and Figure 15. 12. 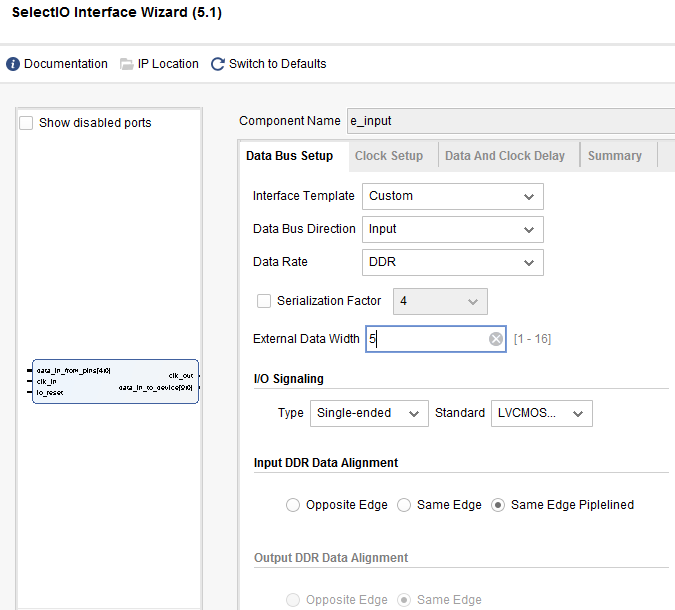 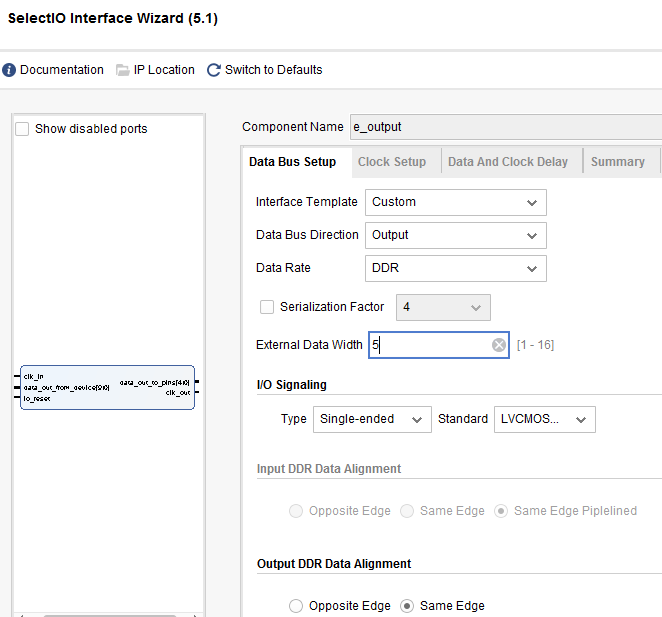 When using the SelectIO Interface IP core as an output, it is necessary to meet its input timing, as shown in Figure 15.13. In the loopback test, the data is output by the e_intput_inst module, so the output clock rxc_r, which is clk_125m_90 after the PLL positively shifted by 90 degrees, as the output clock. Therefore, the clock and data input to e_output_inst will be 90 degrees different from each other to ensure the correctness of its output timing.

After the three IP cores are instantiated, check the code synthesis and use the .xdc file to assign the pins.

(Note: each program in this experiment contains a smi_ctrl module. In the folder config, it is a module for setting the PHY chip, in order to solve the problem that some computers cannot connect to the network port normally, and will not be explained in detail for the moment)

See Table 15.1 for the pin assignment. 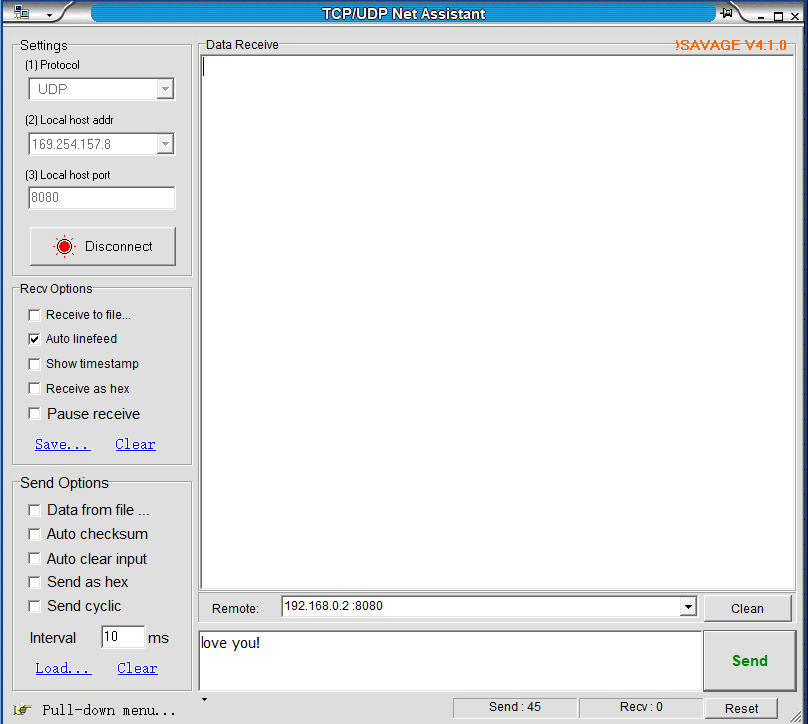 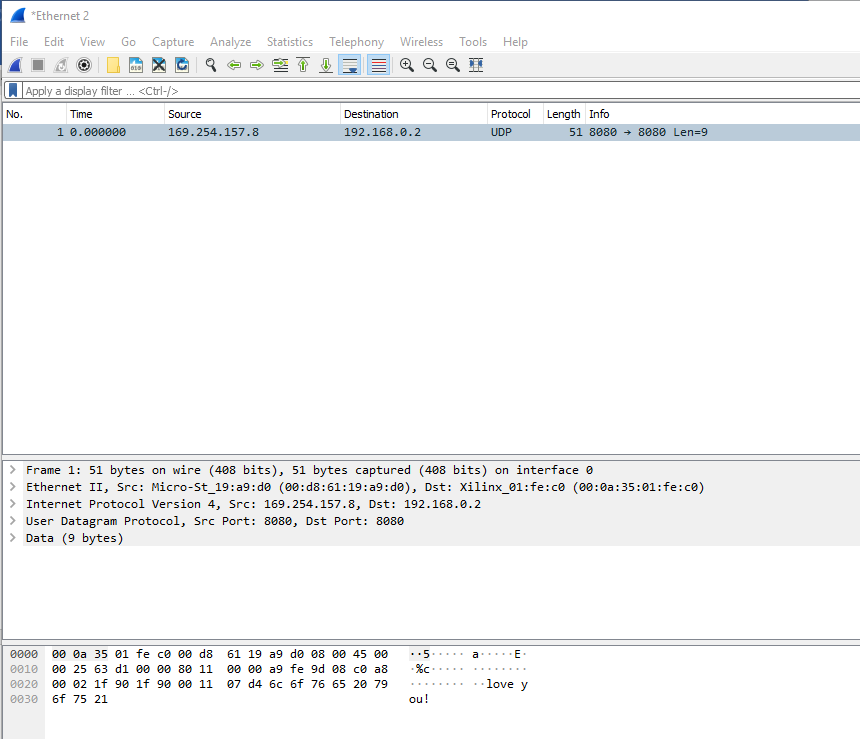 Figure 15.16 Correct reception of data on the PC side

For complete Ethernet data transmission, it is necessary to have the receiving part of the data and the transmitting part of the data. For the convenience of experiment, we store the data transmitted by the PC first in the RAM. After reading via the transmitting end, send it to the PC. For a series of data unpacking and packaging, refer to the project file “ethernet”. A brief introduction to each module follows.

Rx_finish state: A packet of data is received, and it jumps to the idle state to wait for the arrival of the next packet of data.

Start state: Send the packet header and jump to the make state.

Send55 status: Send 8 preambles and jump to the sendmac state.

The pin assignment of this test procedure is identical to that in loopback. 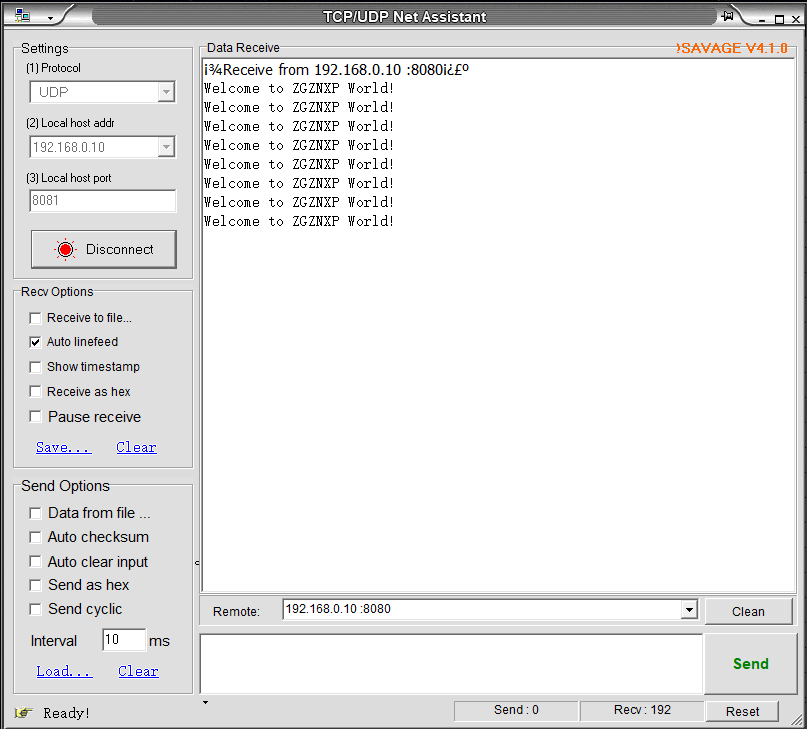 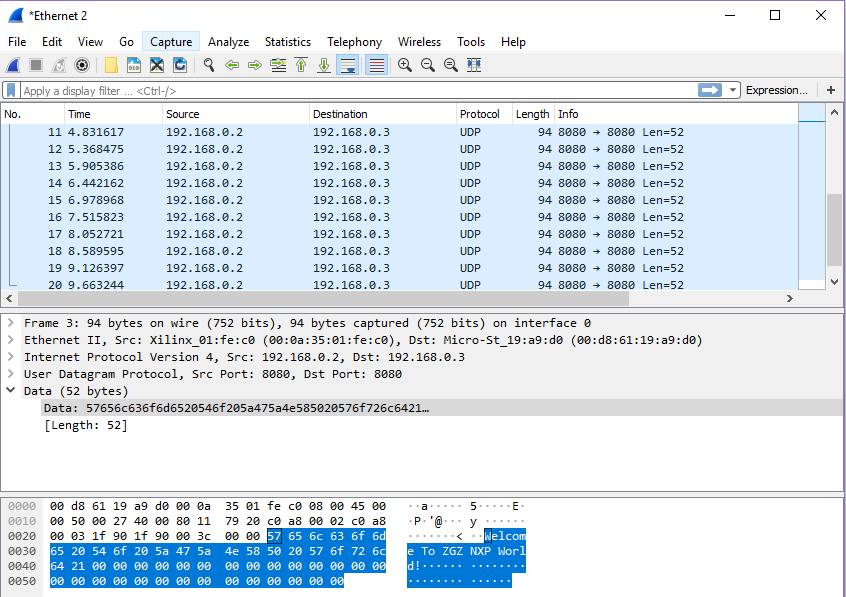 Figure 15.20 FPGA repackages the received data and sends it to the PC 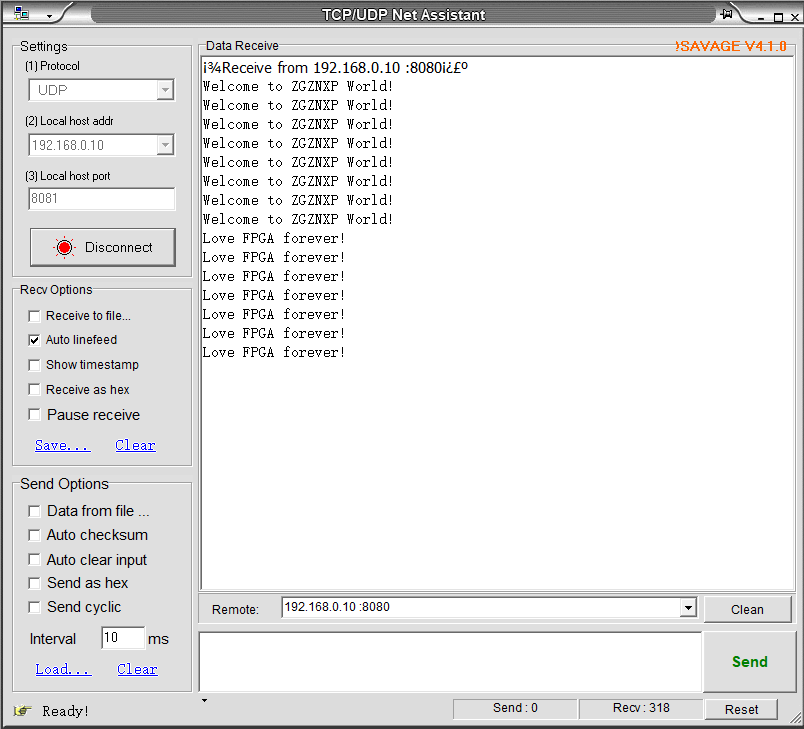